Globally, at least 80,000 people have been diagnosed with the illness. 2,800 confirmed death cases mainly in the mainland origin China. 32,905 confirmed recoveries. Confirmed 46,477 currently infected with 38,008(82%) mild condition and 8,469 in critical condition. More new cases are being reported outside China than within.

The novel coronavirus COVID-19 is affecting 50 countries and territories around the world and 1 international conveyance (the “Diamond Princess” cruise ship harbored in Yokohama, Japan).

On Wednesday 26,Feb 239 passengers aboard the China Southern Airline was caught red handed on camera landing at Jomo Kenyatta International Airport(JKIA) in Nairobi amidst their ban. Evidence have emerged and what seems to be a Memorandum of Greed between Kenyan Authorities and the Chinese Government that despite the suspension of this airline to land in Kenya, it has been landing in with prohibited Chinese nationals. Here are flightstats tracking and which substantiate they landed on 21-22 Feb before being caught. 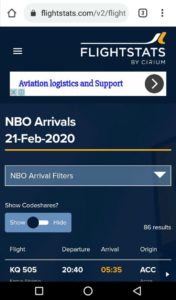 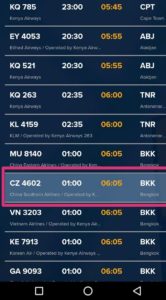 The Ministry of Health and Chinese Embassy in Kenya have however claimed that the flight only resumed the very day the airline was caught that’s 26, Feb and that the airline’s flights have been reduced to one a week and which doesn’t make any sense to me. 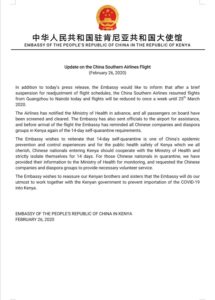 Government needs to be clear if it’s on a Humanitarian rescue mission or on a barter trade.

Reduction on the number of flights from China to Kenya ain’t a logical control measure to eradicate a virus that can be transmitted by one person and infect thousands of people by a single cough. And infection of 1000 people can infect all population in Kenya within hours.

The foul play by the government agencies over the safety of a whole nation is the highest level of misconduct and unprofessional.

With the daily proof of varying time of incubation for this virus cannot assure the safety of the people around these suspects as some show symptoms after 2-3 more weeks after the International Normalised Incubation Time. They might fail to show symptoms of illness after 14-day self quarantine but come to show it later. With this life cycle, i see no need of Government taking chances and risks of allowing these risky groups into the country whether they test negative or not.

MOH (Ministry of Health) requested for 1.8 billion from the National Treasury to set up Corona virus isolation and quarantine facility centre. A project which might take months and which China did in 8 days. Hold on onto assumptions, the fund has not even been considered to be released. The reluctance, unpreparedness and last minute rush will kill us in world record time good enough for Guinness book of world records. To make the matters worst leave alone worse, screening machines Government is relying on, was made by countries that have fully banned entry of Chinese into their territories. These are super powers that have even lost trust in their technology which our poor Government has fallen in love with.

“The entry of all Chinese citizens via Russia’s state frontiers will be suspended…for work travel, private travel, study, and tourism,” Statement from the office of Tatiana Golikova, Russia’s vice prime minister in charge of health effective from Feb 20th.

The United States said it will not allow entry to Chinese nationals and other foreigners who have recently traveled to China, a move that angered Chinese officials who cited WHO comments against overreacting to the crisis.

56 year old women, a hotel worker in China was recently diagnosed with the novel coronavirus after eight consecutive tests failed to detect her condition when she was in quarantine, officials revealed.

The 56-year-old from Sichuan Province went into isolation earlier this month after one of her colleagues had been infected with the virus.

Tang was placed under quarantine on Feb. 2. From Feb. 7 to Feb. 23, medical workers conducted eight tests on Tang by taking throat swabs.

The medics then carried out nucleic acid detection tests using PCR (polymerase chain reaction) techniques to check if she had contracted the virus.

All eight tests then came back negative.

Tang was later transferred from a hospital in the county to another hospital in Ziyang city on Feb. 21.

Doctors finally confirmed that she was infected with Covid-19 on Feb. 24 after conducting further clinical and laboratory tests. This means that a total of nearly three weeks had passed since Tang was quarantined.

Reuters reported that a 70-year-old man in Hubei was infected with the coronavirus, but only showed symptoms 27 days later.

One factor that distinctly differentiates Covid-19 from SARS and MERS, is the absence of certain symptoms like fever in suspect cases at initial phases.

Which means that temperature screenings could potentially miss out on infected people who are asymptomatic.

Maybe a basic knowledge about all viruses is that they aint curable due to their multiple subgroups and serotypes and which keep on changing and advancing hence they can only be suppressed to stop their replication or inhibited or prevented by vaccination whereby in the case of  Covid-19 there is no vaccine yet.

Harvard student seeks Sh164m from Museveni for blocking him on Twitter

How Karoki, Obiri are keeping fit amid Covid-19...

7 cops arrested while drinking during curfew

Treasury suspends all due payments over Covid-19

How Karoki, Obiri are keeping fit amid Covid-19...