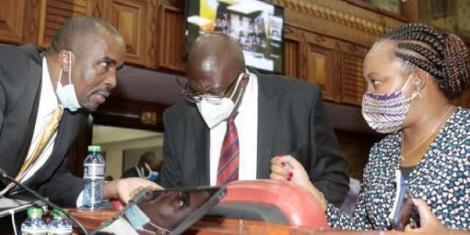 Kirinyaga Governor Anne Waiguru has showered her husband and Lawyer Kamotho Waiganjo with praises for leading a robust defense against her impeachment charges.

The Kirinyaga County Assembly voted on  Tuesday, June 9, to impeach Governor Anne Waiguru with 23 ward representatives supporting the motion anchored on violation of the Constitution, abuse of office and gross misconduct.

She was however cleared on Friday, June 27 after the 11- member Senate committee found that two charges against the governor including gross violation of the constitution and abuse of office and gross misconduct were not substantiated.

Kirinyaga MCA’s had accused Waiguru of failing to deliver the annual state of the county address for the Financial year 2018/2019 to the County Assembly.

In a press statement issued on Saturday, June 27, the Governor also issued three promises after the Senate cleared her of two charges, gross violation of the constitution and other laws, and abuse of office. The Senate ruled that the MCAs failed to prove evidence tabled against her.

Waiguru stated that she had forgiven the MCAs who orchestrated the plot to impeach her.

“It is profoundly clear that this impeachment process did not meet the required threshold and that it was all a choreographed plan of events that was aimed at tarnishing my name.

“BUT as I said before, I forgive the forces behind it. The report’s findings did indeed reveal areas of improvement in administration by officers and need for better checks and balances,” she stated.

Waiguru further called upon the MCAs to ensure that services are delivered to Kirinyaga residents. She assured Kirinyaga residents that relevant issues affecting them will not go unaddressed and that the necessary changes and improvements will be made to both human resource and systems with the aim of improving service delivery to the people of Kirinyaga.

“That said, I call upon the County Assembly to own up to their failures and play their part in ensuring that we move Kirinyaga forward. Rather than prioritizing funds to projects such as the building of MCAs offices, they should prioritize the allocation of funds for Covid-19 management and healthcare projects as proposed by the executive.

Waiguru has since said that she is ready to have a sitdown with MCAs so as to find solutions to the issues bedevilling the county.

“We have much to do and little time to achieve it. My government remains ready and willing to work with like-minded individuals committed to the service of Kirinyaga residents,” she rallied.

While lauding the Senate Committee for declaring the impeachment as null and void, Waiguru reiterated that she will defend the Building Bridges Initiative.

“As I said before, my woes are solely because of my stand for BBI and support for the Handshake between His Excellency the President of Kenya Uhuru and Former Prime Minister Hon. Raila Odinga. I will not stop my support or change my commitment to what will be for the betterment of our children, for women and the country as a whole. We must continue our quest for a better Kenya, whatever the price will be. I am determined to play my role, I hope you all do,” she declared.

On Saturday, June 27, a section of Kirinyaga residents poured into the streets to celebrate the decision by the Senate Committee to acquit Governor Waiguru on the impeachment charges levelled against her with celebrations being witnessed in Mwea and Kagio.